* We received some products to host the DisneySide party.

I wanted to take advantage of the one birthday of my eldest son and we threw him a surprise party inside the Disney Party @Home Celebration, my son knew that I had to throw a Disney Side party as part of this campaign, so it was actually easy to make the preparations, without suspecting, I always told them I had to throw a party, but I didn't want to choose a single theme, rather one for each of my three sons: Disney Princesses for my daughter, Mickey Clubhouse Disney for my son in between and Toy Story for the eldest , your favorite movie. Disney @Home Celebration sent us a package to throw a Mickey Clubhouse Disney party, to complement, Sandra made some chocolate-covered chocolate popsicles in the shape of Mickey Mouse's head. We also prepared some cookies using the cookie cutters or cookie cutters that we were sent inside the package for the party, we had two different figures, the typical Mickey head and a profile, we accommodated them in the cupcake holders on a few plates . In addition to the decorations that Disney sent us @Home Celebrations, we made some Mickey Mouse Garlands, simple but very nice and inexpensive, with construction paper. For the Disney Princess section, we decorate with some Birthday Express products, the wall stage and chandelier were very successful with the girls, the chandelier is very novel and brings a few slats that give it a more feminine touch, you can accommodate it with a few studs from the ceiling or on the wall, we were also sent plates and glasses of Disney princesses. One of the crafts that made the little princesses were a few wands also courtesy of Birthday Express, the wands come in pack of four, are thick cardboard, include stickers or stickers for girls to decorate their taste. We also made some Etch portraits to Skecth and added a printed photo with that style, with paper from HP Creations.

For the Toy Story section, we also decorate with a stage and tablecloth that we already had from another party, you know here everything is recycled. We set out to look for Toy Story toys, we found several, but the one that was perfect in cupcakes was the tender Wheezy penguin who sang the song "I Am Your Faithful Friend" or "You've got a friend in me". 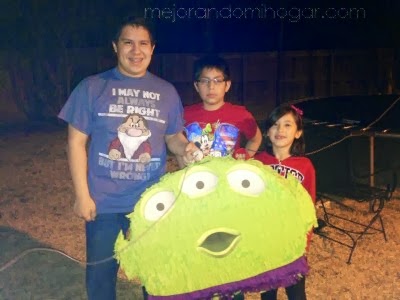 As Toy Story was the main theme of the party, I came up with a piñata with the figure of one of the green Aliens or Squeeze Toy Aliens from the film, also known as Little Green Men or LGM, check out my video with the step-by-step pineapple. As a Toy Story snack, I came up with a few letter cubes with General Mills Honey Nut Cheerios cereal bars. My kids excited because they were putting Box Tops together with every box I vacated. I also had on photo booth, now that they are so fashionable, I used the suitcase that American Tourister sent me the official Walt Disney World luggage; like a trunk of props or accessories, some i already had, others from Birthday Express and some others made of paper. I had a Sweepstakes among the girls assistants, there were two winners of the Minnie-Rella DVD. We had karaoke, the kids played video games and on the trampoline, in short, in the end, my son was very happy with his surprise party and apparently all the guests too.